The store will not work correctly in the case when cookies are disabled.
Prices on this website are in Canadian Dollars. Special Offers on Gut Eze & Krill Oil !
Menu
Account
Settings
Language
Default Store View

Turmeric: From Ancient to Modern Times

The information below is required for social login 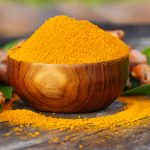 Turmeric, also known as the golden spice, has played a vital role in the history of medicine since ancient times. It has been documented that turmeric was an important medicinal spice used over 4000 years ago in the subcontinent.

This flavorful spice is grown in Southeast Asia and gives curry its vivid yellow color. Turmeric is generally grown from the root system of the flowering plant Curcuma. Curcumin is the primary active ingredient of turmeric. The yellow color of turmeric is a result of curcumin. The advantages of curcumin are turmeric's main strength.

Curcumin has anti-inflammatory properties and is rich in antioxidants. Research and clinical trials suggest that turmeric plays a vital role in reducing inflammation, helps relieve symptoms of ulcerative colitis and arthritis, and reduces the risks of colorectal cancer.

Let's get into more detail regarding the benefits of turmeric and the right way of eating it.

In Western countries, arthritis has become a prevalent problem. There are various categories of arthritis, but the most common one is joint inflammation. Studies have shown that the primary ingredient of turmeric can help patients with arthritis due to its anti-inflammatory properties. In fact, clinical trials proved that curcumin outperformed anti-inflammatory medicines in rheumatoid arthritis patients.

Cancer is mostly distinguished by a condition that causes uncontrolled cell proliferation. The benefits of turmeric are so vast that it also helps in the prevention of cancer. Research has shown that this golden spice in the form of an organic curcumin supplement can help treat cancer. Curcumin directly impacts the proliferation of cancer cell growth.

According to research, it can:

Data shows that if taken with an absorption booster, turmeric will be able to stop cancer cells from growing at all, particularly tumours of the digestive tract like colorectal cancer.

One of the factors thought to be responsible for some diseases and symptoms of aging is oxidant degradation. Antioxidants are mostly helpful because they shield your body from free radicals, which mix with essential DNA, proteins, and fatty acids, oxidizing them.

Due to the chemical makeup of curcumin, it is a strong antioxidant that has the ability to combat free radicals.

Curcumin as a Treatment for Alzheimer's

Turmeric raises the levels of BDNF(brain-derived neurotrophic factor) in the spinal cord and brain. BDNF is a protein in the brain that is essential for maintaining the integrity of nerve cells (neurons) and controlling the interaction between them, both of which are essential for memory and learning.

Since low levels of BDNF protein are correlated with Alzheimer's, curcumin has been proven to prevent and slow down brain aging.

Turmeric as an Antidepressant

Various studies have shown the antidepressant properties of curcumin. Curcumin can reduce depression and improve the efficacy of antidepressants. Some suggest that curcumin can raise dopamine and serotonin levels in the brain.

Curcumin can enhance cardiovascular health and the condition of the delicate membranes that surround the interior of the circulatory and respiratory arteries. Poor arterial activity is linked to aging and a higher risk of heart attack. This membrane is crucial in controlling blood pressure in the body. Therefore, turmeric can assist in preventing age-related functional impairment and lower your risk of acquiring heart problems.

Curcumin can aid in the treatment and prevention of diabetes and its related diseases, including diabetic nephropathy.

Through its antioxidant and anti-inflammatory qualities, turmeric can help treat several of the conditions that lead to diabetes, such as high blood sugar, insulin resistance, and hyperlipidemia.

In addition to the above

Studies seem to indicate turmeric's benefits in managing certain types of cancers - example colorectal cancers in asians where turmeric is a natural part of their diet.

The earliest use of turmeric dates back to 1500 BC and was used for religious, culinary, and  medicinal needs. The use of turmeric has been documented in the oldest Hindu scriptures from the Vedic era. Turmeric was widely used all over the subcontinent and even in China.

Turmeric was regarded as a natural digestive remedy and a promoter of joint health in China. Turmeric was utilized in Arabia to support digestion, skin health, heart health, and other conditions.

Furthermore, it was used for healthy skin in several South Asian nations. Turmeric is used on injuries to speed healing and treat skin issues.

It wasn't until the late 19th century that it finally reached the West, and scientists started investigating it. This was when the structure of turmeric was identified, and its most potent and beneficial ingredient, curcumin, was discovered.

A very important discovery regarding curcumin was made; its lack of bioavailability. This means that turmeric, most importantly curcumin, does not easily absorb into the body.

Thankfully, after scientific research, we know of several ways curcumin can easily be absorbed into the body.

Organic turmeric with black pepper has been proven to increase the absorption of curcumin into the body. A compound called piperine, found in black pepper, works by shielding curcumin from aggressive gut enzymes that stop the nutrient from entering the bloodstream.

Piperine is a powerful drug metabolism blocker. As a result, it increases curcumin absorption by over 2000% while having no negative side effects on the body.

Curcumin is absorbed better when combined with healthy fats like plant oil or taken with full-fat milk. If you take organic curcumin supplements, it is better to have them with bioavailability enhancers or pair them with a meal.

If you want to enhance your overall health or frequently complain of joint pain and stiffness, you should consider taking Organic Turmeric capsules.

While ancient societies continued to use turmeric for the health benefits they always knew it had, western medicine started to research turmeric and curcumin and have supported the wisdom of these old customs: turmeric is a potent root with many health advantages.

Now you can avail its many health benefits by taking advantage of our amazing holiday special deals. Get in touch with us and find out more.

* These statements have not been evaluated by the Food and Drug Administration. This product is not intended to diagnose, treat, cure or prevent any disease. It is recommended that a physician be consulted before taking any supplements. Results are not typical and may vary.